State of the world...

...well MY world anyways.
It's been a bit dead on the blog lately (if you hadn't already noticed). It's not that nothing happens - I've just been too tied up in other projects.
I don't remember if I have mentioned it earlier, but I've started playing music again *yay*. It kicked into gear when I decided to buy a Line 6 Guitar Port with recording software called "Riffworks". Now I already owned a Line 6 Pocket POD, but unfortunately there was way too much latency if I tried to use it to play through the computer, and besides I still lacked some proper recording software, so I never really got around to it, untill I got the Guitar Port. And even more when I got back the Dean. With the active EMG-81 pickup it really kicks ass, and I've recorded about 9 new tracks within the last 3-4 months or so. Well - actually one of the tracks is the last song I originally wrote for Frozen Sun, but it never really got played and the band split up not long after I left - so I still claim ovnership of the song.
Anyways - I've also teamed up with Mike (drums), whom I played with back in the good old days before Frozen Sun - when we were Hosts of Chaos (among many other interresting names). Currently we're rehearsing once a week - but will kick it up a bit during the summer - and we're gonna need it, going through the catalogue of tracks I've established over the past few months.
The procedure is: I make a "rough" track with some standard drums and dubbed guitars in Riffworks, present it to Mike, and we then work through it adding more taylor-made drums and finetuning the structure and various bits and pieces. And within 2-3 sessions we have a good base track. Still no bass or vocals and I'm really excited about what it will turn out like when everything is more finalized. But it's a new, exciting and very appealing workflow - and it really suits the both of us, having full-time jobs and other activities. There's not much mucking about - and since the tracks are about 75% done in terms of guitar and drums when we start working on them together, we can just focus all our ressources on nailing the last 25%.
I've presented some of the tracks to a few of my friends and colleagues and recived really great feedback - but of course the real treat will be when we make it more publicly available - trough myspace and/or mymusic. But that's not yet, so be patient.
- so now you know what's keeping me busy - apart from work, excercise and the occasional bender ;)

Once I get the funds, I'll definetely have to get me a (mac)laptop for recording, along with ProTools and perhaps a little mixer. But that's in the future. I've already spent more than enough.
categories : News

Life is good - in Esbenland 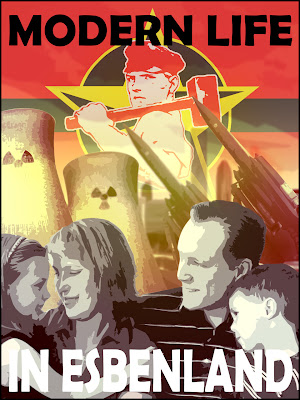 *brought to you by the Ministry of Truth.
categories : News

- I think it's gorgeous.
categories : Oddities

My baby is back

- no, I have not found a basket with a mysterious love child at my door step.
I'm talking about my good old Dean guitar from the Frozen Sun days. The guitar I played when we recorded our debut CD. The guitar I played on our last couple of gigs. Meeeemorieeeees....
After 8 years or so, she's in my possession again. Took some shining up by the good folks at Akustikken, but they did a great (and relatively cheap) job, and it's fantastic to play it again. Much, much easier than the Brownsville I've been playing for the last many months.

It has a nice and crisp sound, and hardly any noise as opposed to the Brownsville.
A small bonus is the fact that I now have 2 guitars at my disposal, which gives a much more varied sound when I'm recording dual guitar tracks at home.

- apologies for the crummy picture by the way, but it's a picture, René - I promised nothing more...
categories : News