It's my last day of the summer holiday - for now - and today it really looks like the summer is fading. It's been pouring down all night... So here's a few shots of something to look forward to next year :) 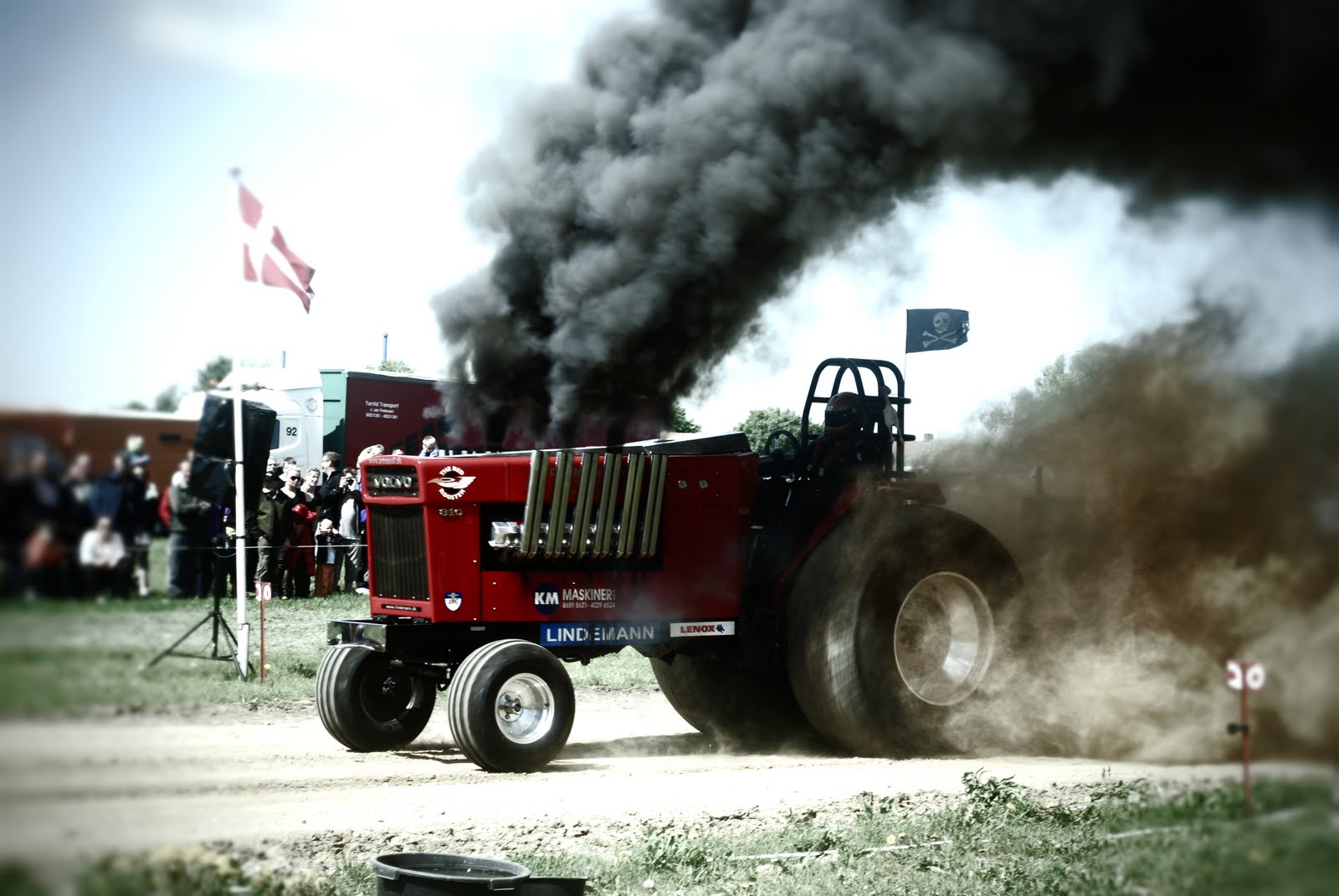 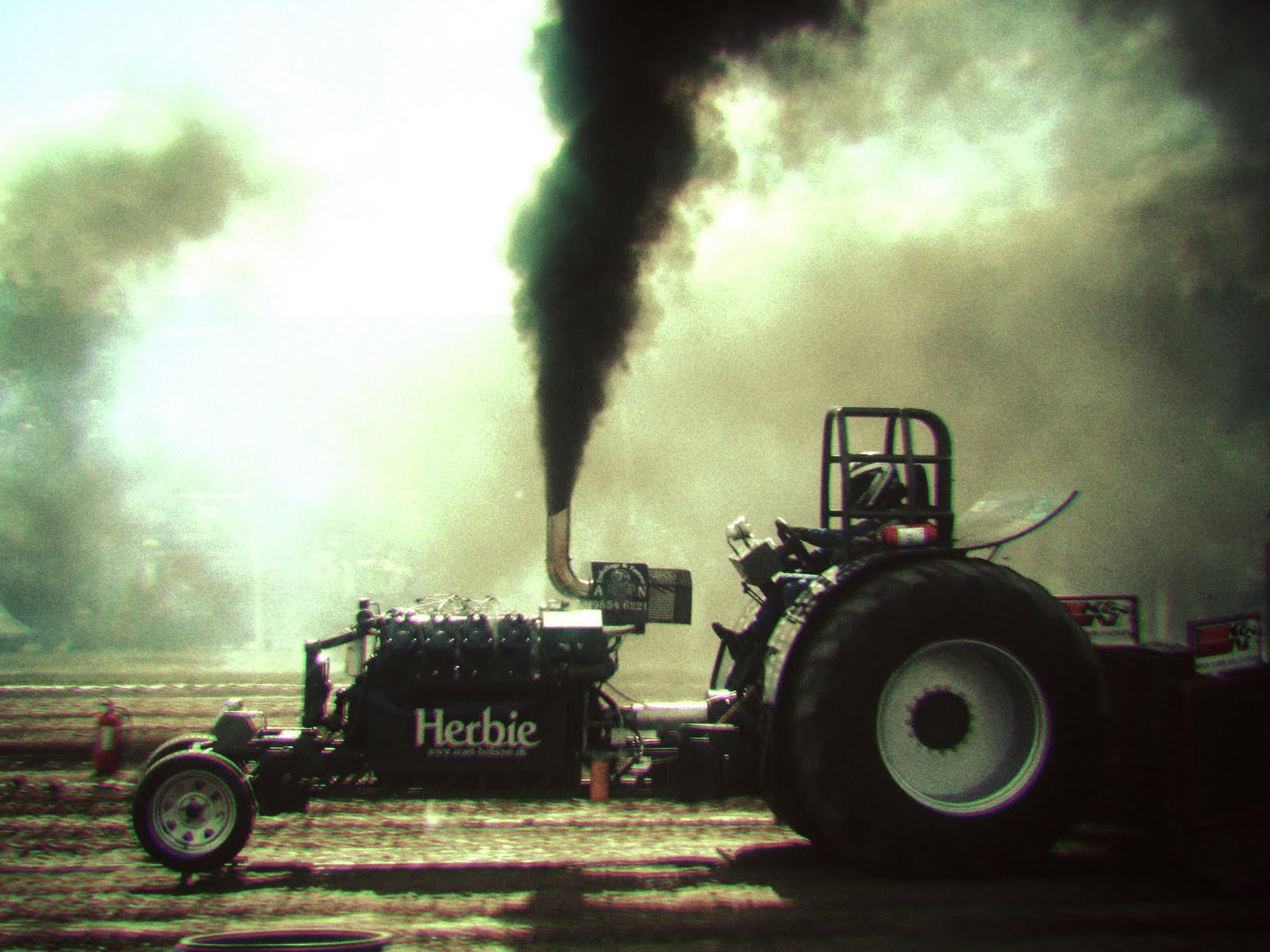 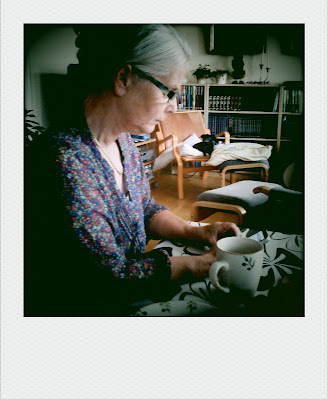 I gots me a new mobile. Well actually it's a familiar one more or less. I used to have a Sony-Ericsson X10 mini pro. Now I have it's successor: the Experia mini pro. It's heaps better than the old one - which was good. But this... Yum. Sussi also got one, and her mum got Sussi's old HTC Legend. This is her being all nerdy with Android for the first time...
categories : android, mobile, News

- I can totally dig it. Makes me almost happy I haven't installed GTA4 yet, but it's just waiting in the drawer. Waiting for winter. Would be nice, if iCEnhancer was complete by then, so I can enjoy my first look at GTA4 with this sweet mod :)

Last month finally saw the release of the long awaited follow-up to the cult classic, Duke Nukem 3D - a first-person-shooter that turned the eyes of the world towards a small game developing company by the name 3D Realms - and possibly the one game I've played the most. Ever.
Another classic hit (released under the company's previous name, Apogee - who also released the older Duke Nukem side scrollers) was Rise of the Triad - another FPS (and one I enjoyed quit a bit - and still do on occasion). Apogee turned 3D Realms for the creation of titles such as Terminal Velocity, Duke Nukem 3D and more. In other words Apogee/3D Realms has a long tradition for good gaming.
So what happened in the 14 (yes fourteen) years it has been in (and out of) development? Was it worth the wait? All in good time - first a bit about the game itself.

Being the big Duke fan I was when the old classic was released (and many years later), I've been awaiting this title with an almost childlike suspense. And it can come as no surprise to you, that I shelled out the bucks for the grand package, containing a card deck, stickers, poster, buste, poker chips, hardcover concept art book, postcards and more... and of course the game itself. 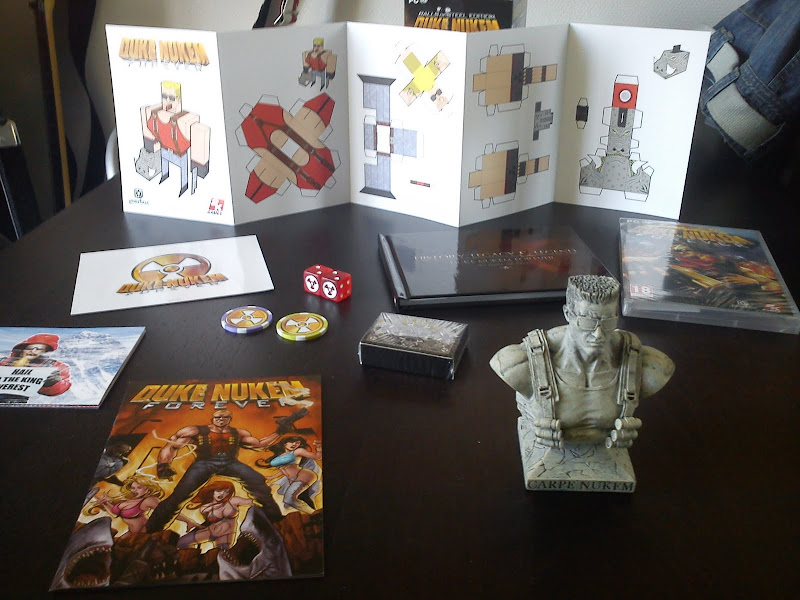 - not a bad package for about 600,- dkkr. But of course the most important part was the game.
Not surprisingly, you have to register the copy with STEAM, which not only allows you to play the game anywhere you can access your steam account, but I also found out, that save games and configuration (key bindings etc.) are somehow stored with your STEAM account, which gives you the option to play from your last save from any computer, as long as you log into STEAM - and no re-binding the keys either. This was a first for me - and it is absolutely great.
- but that's technical babble which does not have anything to do with the actual game...

The graphics in DN4Ever are not overwhelming, but not bad either. Much of the mood reminded me of F.E.A.R. and I think the quality of the graphics are similar - but F.E.A.R. is 6 years old by now. So not exactly up-to-date graphics, compared to other more recent games. I have however never been the one to get hung up on graphical quality - gameplay is much more vital to me (and yes, I still play old DOS-games once in a while)... In any way it's a fine update to the old Duke. And after 4 engine switches, there was hardly time for another, should the game ever be released. 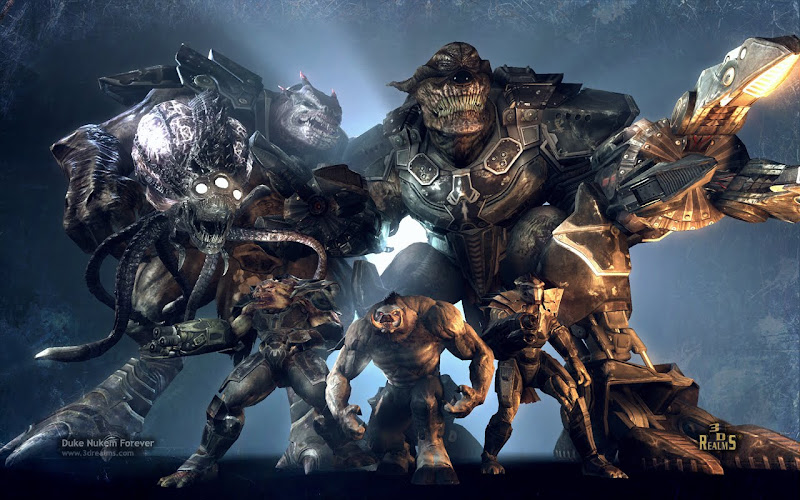 The sound is good - and Duke has the expected, varied arsenal of cool one-liners to go with his macho character. Explosions, ambience and effects are all quite good. But then again - more than a decade since the last release, it had better not have the same thin, noisy sound quality as it's predecessor.

The gameplay however, was a bit of a let down. Too linear, too scripted, too confined - and some really poor design choices, does not make it the game it could've been.
Old duke could carry every single weapon in the game at the same time. New duke can only carry two, and an assortment of explosives (like the pipe bombs) - come on. Where's the fun in that? And if you were aiming for a hint of realism, you should probably not include the option to flip over a monster truck with your bare hands. In addition, it takes too damned long, to swap an empty weapon for a dropped one, in the middle of combat.
You can't save whenever you wan't to, which makes you having to play the same sequences over and over again - that's not exactly good game design, and it has made me walk away from the game in frustration several times.
Much like HalfLife 2, there's a path layed out for you, and you can't really stray. And parts of the levels "close down" behind you, once you enter the next part. Old Duke had much more freedom of movement - and going back to parts previously visited. I would've liked to see a bit more sandbox. Not GTA-like sandbox, but just a little less confined. And where are the damned secret levels? Old Duke had several.
To sum it up, I think they would've been better of with a remake of the old Duke - storyline and levels.
And what happened to the Jetpack? One pathetic ride on the corpse of an alien? You have to play multiplayer to get to try it for real. Bad. It was an important element of old Duke singleplayer (and multiplayer). The "improved" freeze ray? Nah - not really an improvement, but at least you get to switch to old style freeze ray when you unlock som extra features upon completing the game. Unlocks also include game speed, and I found that 125% was much better. Less sluggish movement, and more up-tempo action in general.
Boss fights are good, and I also liked the parts where you have to drive a monster truck between locations. I would've liked to see even more vehicular action, as I found it quite fresh for Duke, added variation to the gameplay and honestly - a hero like Duke, who can't drive a car or operate a plane or helicopter?
Dukes health is no more administered from health packs, but by an "ego-bar", which you can enhance by reading porn, admiring yourself and interacting with level objects in general. Your ego will drop when taking fire, untill a critical point where the next shot will kill you. Duck and cover for a while, and it recharges. I actually thought this worked quite well.
The game had about 12 hours of entertainment for me in the first run through (I did 3 so far) - which is more than Doom 3. It has a lot of the funny features you'd expect from the Duke series, but it fails in level design, gameplay and replay value.

So in conclusion - was it worth the wait? Not really - unless you're really hardcore Duke fan - and then only for visit down memory lane. This can however also be achieved by installing DOS-box, and running the good, old Duke 3D. And I really mean it, when I say they should make a remake of Duke3D with the updated engine, graphics and sound. I can live without the monster truck, but I really can't cope with bad level design and gameplay.

- and for nostalgic reasons:

- for what it's worth, I do appreciate the fact that it even got finished, despite the downfall of 3D Realms. And I can certainly appreciate the effort by those who decided to finish it anyways. But even so, the game does not deserve more than a (generous) 3 out of 6.
categories : Duke, Games, Reviews

I've opted for another blogger template and overall look - though most of the navigation is kept as it was before. It is wider now, and this means bigger previews of most of the images I post. I've checked if I could resize the images in old posts, and it is possible, but tedious. I may get around to it little by little, but for now, I'll focus on the new content - yeah, like THAT'S ever gonna happen ;)

*edit* I'm still fooling around a bit. A few new additions: Tag cloud for quick access to various parts of the site, and the music player. Now you can enjoy your favourite Fusskalt track, while visiting my blog. Dandy!
categories : News

I've created a few lamps in my spare time - first personal 3D projects in a while.
You can buy them at the3dstudio. 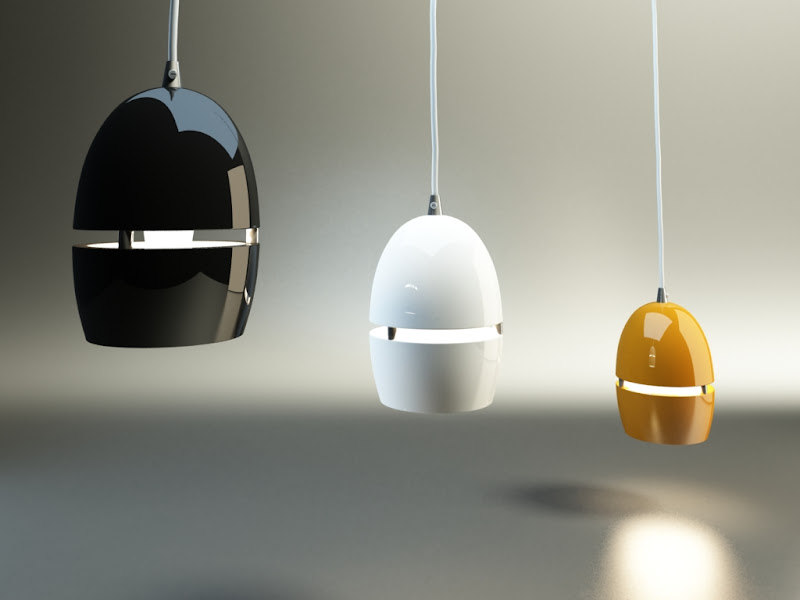 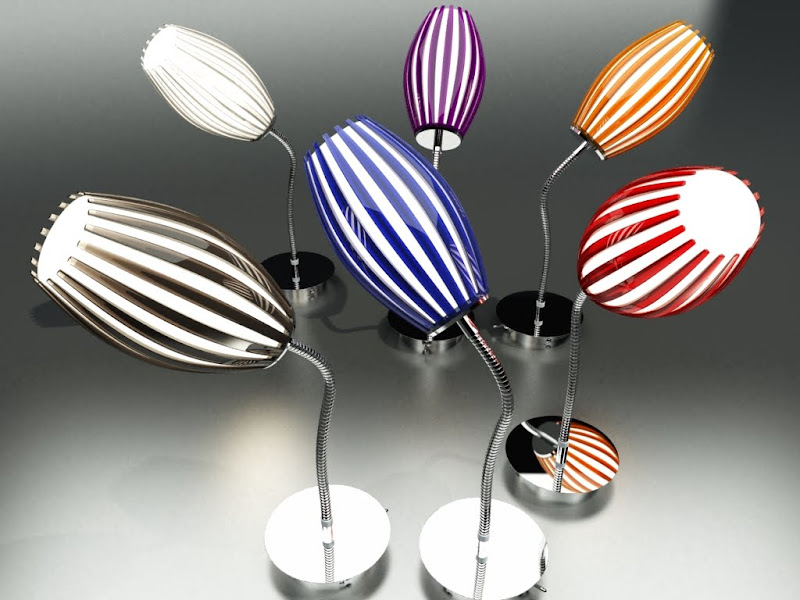 in other recent news...

I just got me a new axe. And it's fantastic. Probably the best I've had since I bought my Dean back in the 90's - in the Frozen Sun era. It's second hand, about 2-3 years old but hardly a scratch. It was in the possession (untill recently) of a member from danish metal-act Raunchy.

And now for something completely different. about 6 months ago we got us a little pup. A griffon belge black/tan - child of champions and with pedigree of course. She's a little ewok/wookie for sure, and being big Star Wars fans, the kids named her "Princess Leia" - or just Leia for short. She's absolutely fantastic, easy to be around and easy to bring around. An ideal family dog. Great with the kids, other dogs and other people in general. 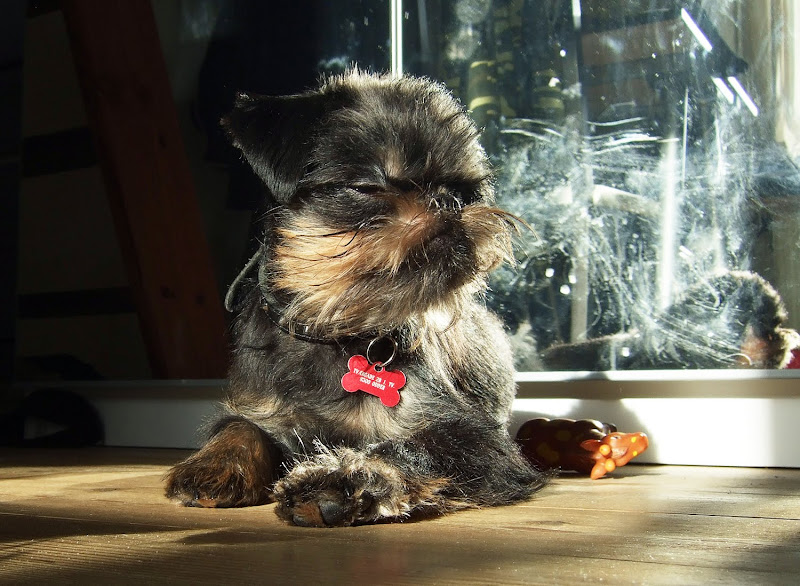 Oh how proud and regal she looks, basking in the sun. 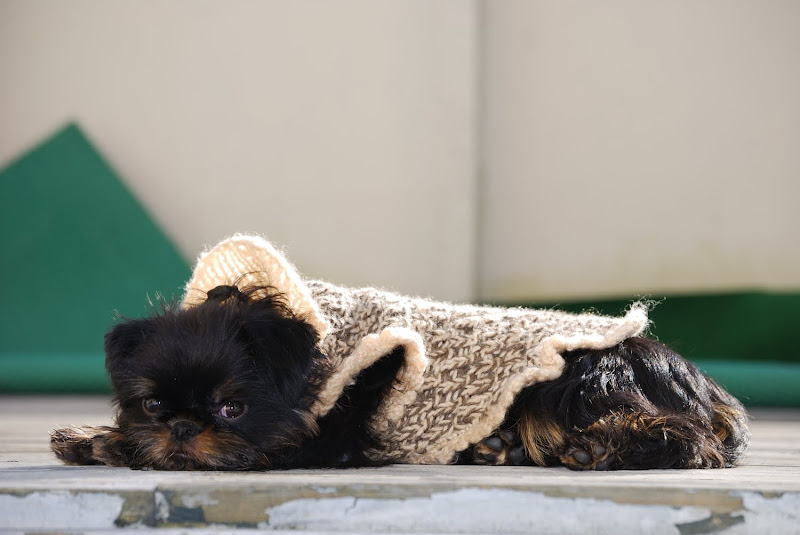 and oh how small she was. This is probably about a month after we got her.
- aren't we just lucky?
categories : News