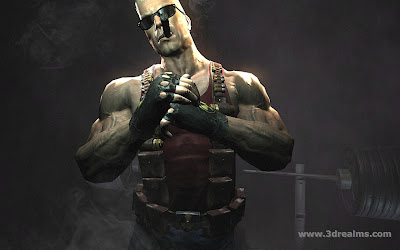 - official teaser for Duke Nuke'em 4(n)ever to be released tomorrow.
This is fantastic news - if there's any truth to it. A nice christmas present. It's only been awaited since '99 or so. But that's what game developing is like.


Not sure what to think. Graphics and mood remind me a lot of F.E.A.R. and there's hardly any environment shots and no more than short flashes of in-game action, primarily consisting of attacking aliens. But then again - it's just a teaser, and it does look promising. But they'll have to step up BIG time, to hype Duke again, after 3 consecutive Vaporware Awards, and one honourary lifetime achievement award.... of vaporware.