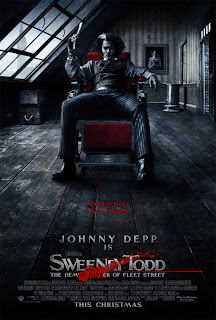 A different kind of barber shop...
Now I'm not too keen on musical movies. Especially not the happy-go-lucky ones. There's just too much overacting and.... singing. Reminds me about "good" ol' danish movies (which in my oppinion aren't very good). I just can't stand over-articulation of even the most ordinary everyday stuff, nor can I stand the need to express yourself through singing, just because the sun is shining. Granted though, there's a few exceptions where singing in movies is OK. Moulin Rouge and Nightmare before christmas to name a few.

- and then there's "Sweeny Todd". Sceptical at first? Sure I was. But after all it IS a Tim Burton film, and it DOES have Johnny Depp (and the ever-lovely Helena Bonham Carter) in the leads. And they sing. But not just songs of happyness and joy. No. The movie was generally dark and gloomy, and so was a great deal of the music. There was little happiness to be found, little light in the dark, and good fortune is something of another world in Tim Burton's depiction of Fleet Street and surroundings. The acting and even the singing was brilliant. Either the cast had been hand picked for their singing skills as much as their acting skills, or they've had some excellent coaching prior to the movie, because they all came out great - even in their duets (which I imagine is hard - especially when you're not singing the same thing).
The base story is good, although not very original. But the characters are fantastic. There's little innocense anywhere, not even among the children - everyone is a cynic or a practical cynic. But especially in Sweeny Todd's case, it makes the foundation for an excellent vendictive personality.

If there was one thing I missed, it was a more grand finale. I didn't quite feel the emotions "all the way in" as I would have liked. But I DID like how so many things were left to the imagination.

- and is it just me, or is Johnny Depp starting to look more and more like Christopher Walken?