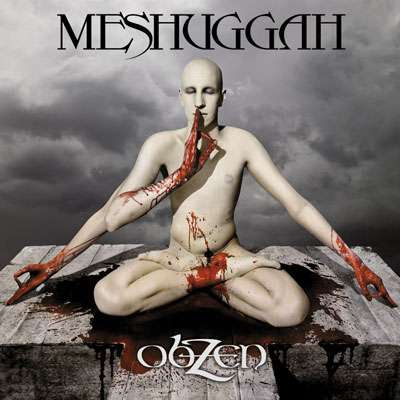 So I was on my way home from work - on foot for a change - and happened to stop by a music store. I thought I'd just go browse for some good bargain deals and special offers. I didn't get any bargain deals, because the first thing that caught my eye in the metal section, was a new release from swedish "jazz-metal" GODS, Meshuggah. What a nice surprise, but I guess that's what you get for not staying up-to-date with the scene.

I've always been a big fan of meshuggah - ever since the demo I once had (yes, I'm that old - I actually owned a Meshuggah demo tape). Meshuggah's music is extremely technical and as such appeals a lot to musicians. Still, they manage to keep it at a level where "regular" listeners can enjoy it too - a very subtle balance that they only overstep once in a while.
They're one of those bands that just seem to get better and better, so naturally the expectations to this album was high. And I must confess, that right from the first track, it seemed like they had found a recipy that really worked. Maybe it's because it's faster and more brutal than the predecessor, "Catch33" which was good, but definetely a bit more on the strange side than usual. It was to me a bit too close to Frederik Thorendahl's Special Defects - which was a nice solo project, but it wasn't Meshuggah.
- but that's all forgiven with ObZen. It's a brilliant and rather up-beat album with a great production and sound. I am so envious of that "hollow" and rich, distorted yet clean crunch, tube-amp, guitar sound (so someone PLEASE cook up a ObZen preset for Guitar Port/POD...).

It's not like they've reinvented themselves on this album but they have made an already great formula just a tad better. Nothing wrong with spicing up yesterdays casserole. Especially if the alternative is... well a little too alternative.
But ObZen is just right. It's filled with the (un)usual off-beat riffs and almost mechanical drums. Whenever the guitars play fairly straight, the drums don't and whenever the drums play fairly straight, the guitars don't - or neither of them play anything straight, but rather some insanely crooked and twisted rythm and riff. It's just brilliant.
- favourite track must be the title track - mainly because of the guitar break about 3.03 minutes into the song. OMG I wan't to hear that part so loud that my ears start bleeding and people in the other end of town call the police...

Go check out the tracks "Bleed" and "ObZen" at Meshuggah's myspace.