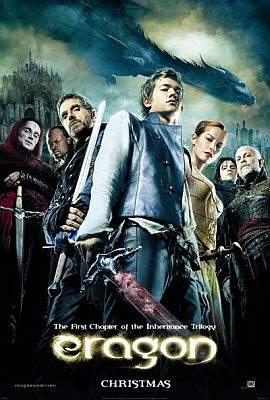 The "hero" is a 17-year old kid - Gay
- who wrestles his cousin for combat training - Gay
- he get's a little baby dragon - Gay
- who's name is Saphira - Gay
- and is a girl - Gay
- who only communicates by thought - Gay
- obviously to save money on CGI lip syncing - Gay
John Malkowich is only semi-evil - Gay
- his dark sidekick is played by Robert Carlyle - Gay
- who is way more evil in Trainspotting - Gay
- and dies without a proper fight - Gay
- in a grand finale battle, which lasts 5 minutes - Gay
Jeremy Irons' character (Brom) dies - Gay
- after having said so many tacky lines - Gay
- on the back of someone elses dragon - Gay
- just because he didn't look after his own - Gay
- but he has a sword that glows - Gay
- which he stole - Gay
- probably from Frodo - Gay
The dark sidekick's henchmen are a bunch of girls - Gay
- who whine when you poke a sword in their foot - Gay
- and die from a small cut on the upper arm - Gay
- but they DO wear makeup to look intimidating - Gay
- and people are obviously intimidated - Gay
The "hero" (once again) doesn't get laid - Gay
- he does not even get a little kiss from the girl - Gay
- even though he saved her bony ass - Gay
- at the expense of Brom's life - Gay
The movie was worse than Starship Troopers 2 - Gay
- it has combat, but no blood - Gay
- it was rushed - Gay
- and predictable - Gay
- and it had a crappy 5 second CGI ending - Gay
- and it's the first in a trilogy - Gay
- so you know there'll be more of this crap - Gay

Seriously - don't bother. Not even if you're paid to watch it. I just spent 104 minutes, which could've been spent more interrestingly by poking red-hot needles in my eyeballs, watching this movie. They get the following rating for at least being able to hold a camera and a microphone boom.

* I mean absolutely no disrespect whatsoever to gay people.
** Image courtesy of the blind and deaf monkeys who released this movie.
categories : Reviews