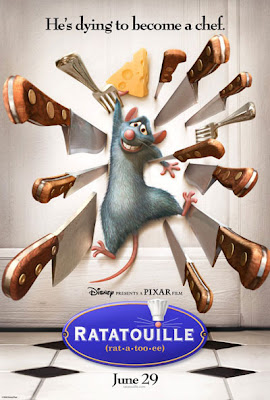 When Pixar (and the monkey on their backs, Disney) release a new movie, there's always high expectations. Pixar has in many ways been defining the 3D-animated movie genre, and they usually always push the boundaries with each release a little further, and thus raising the bar for their competitors to scale. And usually you don't get disappointed (depending on what you look for in a movie of course), but even though it was close to technically flawless, it didn't quite have the same WOWSA-feel as was the case with Monsters Inc. and The Incredibles which I think are some of the best works by Pixar.
So why was I... well... disappointed? Because it was banale to the point where not even the incredibly great visuals could make up for it. It did start out great, but the transition from colony-rat to city-rat was weak, to say the least, and I felt cheated out of the grand emotional drama that it could've been. It didn't get dangerous untill Remy (the rat) set paws in the kitchen. But then it did get dangerous allright.
Then there was the romance between the other main character, Linguini, and the female cook, Colette. How awkward was that? And where did it come from? There had hardly been any hint of it, and suddenly they're kissing in the courtyard? Again - what could've had some great emotion, turned flat and weird.
In general I have to say that the story was thin, there was too much "oopsie-daisy" comedy, and the minor characters that seemed interresting, never really got into the story, and they seemed to only serve as visual filler.

On the technical side however it was brilliant. Especially the wet fur on the rats was great. And the general lighting, shaders and compositions were top notch.
I did however not feel much for the character design. And I don't think they got away with mixing realism and cartoonism too well this time. Paris was lovely and had a great mood, but they failed to "cartoonify" the vehicles. They did even bring in the good old classics from Citroen - Dyane, 2CV, DX - but they just ended up looking weird.
Finally the animations of especially people on 2-wheeled vehicles, seemed blocky and yanked.

In conclusion I have to say I was less than impressed. I had hoped for more, and It seems to me like Pixar need to look in other directions. But I guess with Disney pulling your strings, your movement is limited. Pity, because they were going somewhere great with Incredibles. But unfortunately it's been downhill since.
At least it is definetely still worth a look from the technical and visual side of things. Question is - is that enough for you, or are you that much of a 3D-geek?

I have to give two seperate ratings for this one - one for the story and one for the visuals/technicals. Seems only fair to me.