I saw Iron Maiden live for the first time in november 2006, but I've been listening to their music for more than 20 years now, I think. In fact, Iron Maiden was one of the first metal bands I was ever introduced to. So obviously the concert in november 2006 was highly anticipated. And I thought it was really good. It wasn't what I had expected, because they chose to play the entire new album, "A matter of life and death", which is brilliant - but not quite what I was expecting for my first Maiden concert. I (and most of the other 7999 people) surely wanted a bit more nostalgia...

- which brings us to yesterday. The scene was a freight yard in Horsens (a neighbouring town to where I live), the sun was shining from a clear blue sky, the beers were cold and numerous, and the place was packed with about 12.000 Iron Maiden fans - young and old. Somewhat ideal settings I'd say. And with the tour title "Somewhere back in time", you just knew you'd get nostalgia for every penny.

But first, like the Maiden concert in nov. 2006, we had to endure a (thankfully) short set from Maiden bass player, Steve Harris' daugher, Lauren Harris. Now I'm sure old man Harris is proud, and he should be - it must be nice when your daughter defies an otherwise male dominated genre and still manage to get somewhere. But for me, the music was a bit too naive... like some of the bands that played in youth clubs when I started playing metal myself. They played well, and it looked as if the crowd in the "pit" enjoyed it. But she just didn't reach the back - or my musical gland.

Far better was the second supporting act, Avenged Sevenfold, who served a mix of thrash, power metal, heavy metal tossed together with a bit of NU-metal vocals. Brilliant musicians too. Especially the power riff in the track "Almost Easy" (I think it was called) caught my ears and attention. They did really good, paid homage to Pantera and Dimebag Darrel, as well as their respect to Iron Maiden and crew, for taking them along on this part of the tour. Bit of humour tossed in there as well, and they did a great job of lifting the atmosphere before the main act.

At about 9.20pm, the last rays of sun graced the top of the stage, and slowly started to loosen it's grip on the freight yard in Horsens, where everyone was psyched as Churchill's Speach kicked of the show, followed by Aces High. From then on, the place was boiling for the almost 2 hours Maiden entertained us. And you really must hand it to them. They're not just musicians. They're not just a band. They're entertainers, showmen - and absolutely brilliant ones at that. Although a "small" stage, they filled it out really well, and the show was packed with Iron Maiden relics, backdrops and props - as well as main man, Bruce Dickinson, changing outfits now and then, to tie everything together in tracks like "The Trooper", "Rime of the ancient mariner" and more. See that's just it with Iron Maiden. They're not just prancing around on stage being rockstars - they're telling stories. Stories of ancient times, mystery, bravery and heroism. Just like true heavy metal should be. And they played fantastic. If I have to put a finger on something (because it all just can't be peaches and gravy), I'd say that Dickinson's voice did cut out now and then - it might have been technical issues, it might be because he was running across the stage like a madman, trying to maintain some degree of microphone control at the same time - I don't know. But he was heard clearly whereever it mattered the most, so I am really nitpicking here. Of course he could also just put it even more in the hands of the audience, who on several occasions proved they were true Maiden fans, by singing backup whenever Dickinson requested it - or when it is customary to do so - like the intro to "Fear of the Dark", which sounded just about when the sun finally dove under the horizon...

16 tracks (which in my book is close to 2 albums) was what we got served in Horsens on that perfect summer evening. And they were each served with an elegance and conviction that Metallica could learn something from. Although I like Metallica's old music more than Iron Maiden, they just don't deliver it live as well as Maiden do. So Lars, Hetfield, Kirk, and Robert - go catch Iron Maiden on tour - pick up a trick or two...


The set was as follows :
Churchill's Speach (intro)
Aces High
Two Minutes To Midnight
Revelations
The Trooper
Wasted Years
(666) Number Of The Beast
Can I Play With Madness
Rime Of The Ancient Mariner
Powerslave
Heaven Can Wait
Run To The Hills
Fear Of The Dark
Iron Maiden

- and what a perfect way to end the show. Hallowed... is an all time favourite. Brilliant! 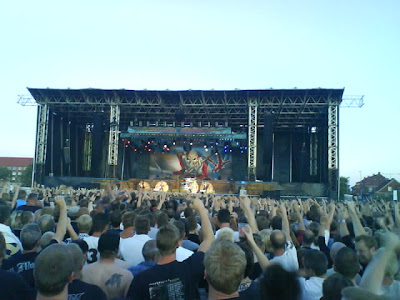 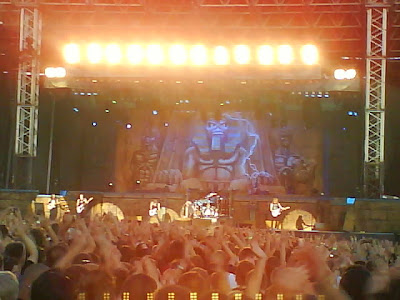 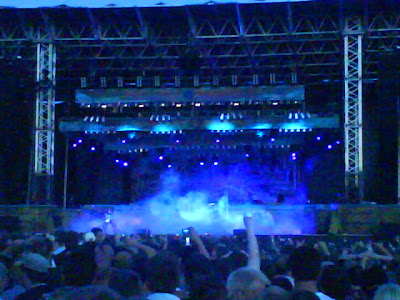 - Rime of the ancient Mariner (FAB!)
*apologies for the crappy mobile phone pics...