My name is Nick. I am a heavy metal junkie (crowd : "Hello Nick"). I've been clean since Iron Maiden in Aalborg, november 2006. But last night I slipped (crowd mumbles, and a few "oohs" are heard from the back).
I went to see Metallica in Aarhus, along with something like 55.000 other metalheads. And I loved it. And as the sweet audible fix was injected directly into my eardrums, I felt at ease with myself like I haven't felt in a long time. It was like rediscovering who I am - where I'm coming from. Like recharging the essense of ME.
- It might sound a little melodramatic, I know. But that concert made a really big impression on me. It was the second best concert I've ever attended, only topped by Rolling Stones in 2006.

I've had my reservations about Metallica since "The black album". To me the defining albums were always "Kill'em All", "Ride the Lightning" and "Master of Puppets" - especially Master of Puppets, which holds some of the, to this day, best metal tracks ever written. It is simply a stroke of musical genius - in my oppinion anyways.
I've also had reservations about Metallica as a live band, because I've seen a lot of recorded shows with bad sound, and bad performance. But all those reservations were put to death after a really convincing performance and a great show yesterday.
The set was dominated by older tracks, which was just what an old-school Metallica fan like myself had hoped for. I'm not much for "Load", "Reload" and "Saint Anger" - and luckily those albums was practically not present, except for "The memory remains" which is pretty good. There's a few good songs on "...and justice for all" and "The black album", and they played the right tracks from those albums.
Contrary to what some of the reviews in today's newspapers say, I think Metallica delivered an amazing performance. The sound was fantastic there was lots of energy, and they played really well. But I was kinda expecting them to play worse, so I was positively surprised.

It might sound like it was all dandy, and for the concert part it was - except for the 20 minute blackout in the middle of the second number (which unfortunately was the classic "For whom the bell tolls"). People got a little restless, and the disappointment was starting to spread. After all Metallica were just getting started - and getting started really well. But they're showmen, and they've tried that stuff before, and shit happens so what do you do? You either let it ruin your day and the experience for 55.000 people, or you shake it off. And they did shake it off - oh yes. After the re-entry with "Whereever I may roam" and and a witty comment from James Hetfield about it being because of Lars' mascara running, the blackout was completely forgotten. At least for my part. And so the hammer came crushing - Metallica style. And it hit me. Hard.

It did not make the experience any worse, that I had my friend and former colleague, Sammy with me, as well as my good old friend Elena and some of her friends too. A small and passionate group that really took the music in with much enthusiasm. Thanks to you guys as well, for making the evening even better.

Supporting Metallica was Volbeat and Mnemic. I was keen to see Mnemic, because Thomas (Obersten) Kofoed - the former Frozen Sun bass player - is now playing for for them. Unfortunately they only got like 30 minutes play time. But they played well, and I'll definetely have to go buy their new album "Passenger" soon.
I've also wanted to see Volbeat the last 3 times they've been in Aarhus, but the gigs have always sold out before I got hold of a ticket. I really like the rock'n'roll style, and Michaels very 60's vocals are excellent. It's far better than when they played death metal in "Dominus".
A good performance, but I'd still like the opportunity to see them in a smaller place. They're not quite the stadium band yet, that Metallica is.

There were a few issues with the logistics, but when 55.000 people needs to get crammed into a confined space, and out again, there's bound to be problems. For some reason the buses that took us back into the city centre, thought the best route was to go through the 55.000 pedestrians. It took us about 30 minutes to cover a distance of only 500 meters.
According to local newspapers, there should've been extra good information, directions and signs. We hardly saw any of this, and it was a bit confusing.
The facilities at the concert area were good though -at least to my experience. At no time did we wait more than a few minutes for food, beverages and toilets. But I have heard about people who were not so lucky.
And then there was this stupid little midget man (and his even smaller midget girlfriend), who insisted that WE got in the way of his girlfriends view, and she was so small so blah blah blah. What the fuck are you gonna do, midget man? Ask the 55.000 people to part down the middle, like you're friggin Moses? Good luck. But he was rather aggressive untill finally his girlfriend got embarresed on his behalf (and she should be) and moved to another location. Funny thing was, that we hardly moved an inch from the spot we had for the entire evening. This incident was not enough to ruin anything - we just laughed at the puny human (he was not a midget or little person or whatever the politically correct term is these days - he was just... vertically challenged).


Here's a few mobile cam shots from the concert : 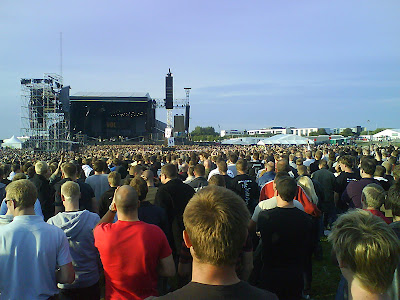 - finally a bit of sun. And quite an impressive stage (and crowd) 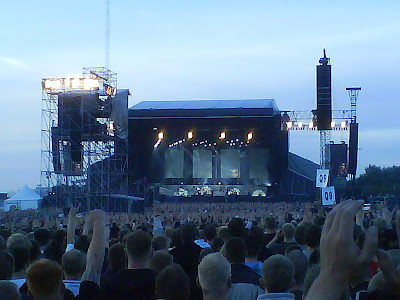 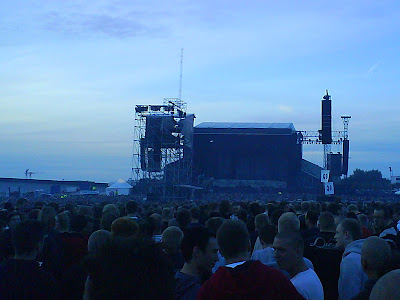 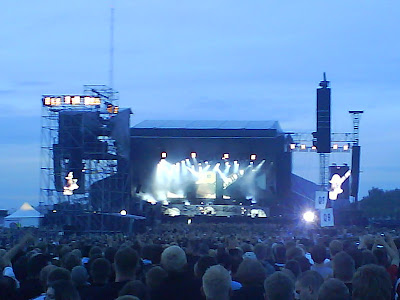 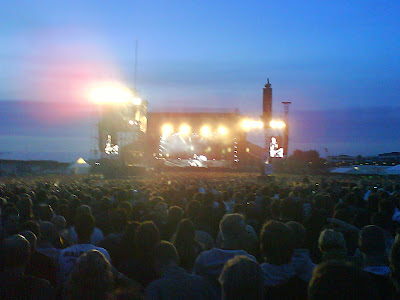 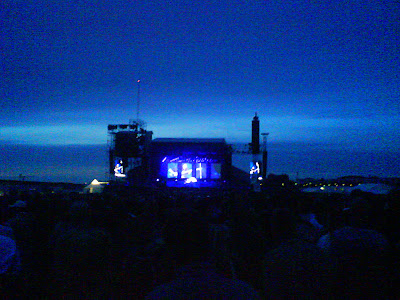 Getting dark - good for the light show. 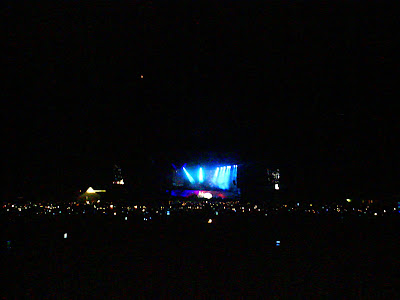 Nothing else Matters - and yes, those are lighters. 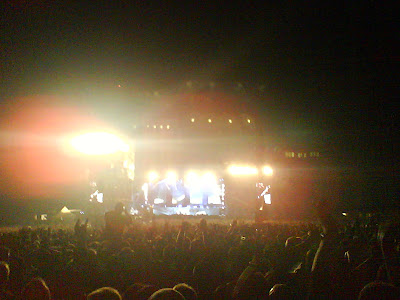 Looks like the enignes of a Saturn rocket taking off... and it's near the end of the show.

- I had nothing to do with the recording of this, in case Lars Ulrich throws a hissy fit over it.
categories : News, Reviews