Just one more week left, and then it's two weeks vacation. We'll be going to Copenhagen for 4-5 days or so, but I'll be going to an open-air concert first, with Metallica, Volbeat and Mnemic, who will be playing at Vestereng friday. A visit to the caravan park where my parents are staying every summer is also planned.
All these activities are more or less dependent on good weather. Alas it has been raining pretty much every day for 2 or 3 weeks now. Just ask the poor, mud-covered schmoes attending Roskilde Festival...
What kind of summer weather is this? It's supposed to be a minimum of 25 degrees celcius and sunny - at least when I'm off duty.

Yesterday we went and saw Pirates of the Caribbean 3. And it was just about last chance, since it had been moved to the smallest screen in the cinema. It was good though. Surprisingly good. I did not expect that after PotC2, which was somewhat messy and fragmented, although the action and effects were good - especially Davy Jones.
But number 3 was a lot better. They managed to tie things together real good, and all the weird curses and mysteries were explained rather well, although they did get away a little too easy with the dead Kraken, in my oppinion. It was however very entertaining, and it did not feel like 3 hours at all. I just pity all those who left before the last scene, after the end credits. Movie-goers these days, are in such a hurry. What's wrong with sitting back and soaking up the experience, before rushing out of the cinema in pursuit of the next overpriced latte?
- oh, and Kiera Knightly really isn't THAT hot...

Somewhat related - in an hour or so, we'll be going to the harbour, to see the tall ships set out to open seas, after 4 days at the piers. Some really nice and big ones, even if the Black Pearl or the Flying Dutchman is not among them. I'll see if I can get som good shots down there.

*edit* Well, I didn't get any good shots (because the little Ixus Izoom is not exactly a state-of-the-art digital SLR with an über-papparazzi-lens), as the ships had already set out into the bay when we arrived at the harbour, but I did get a few shots of one of the mexican ship "Cuauhtemoc". 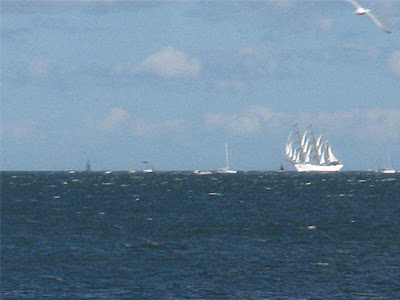 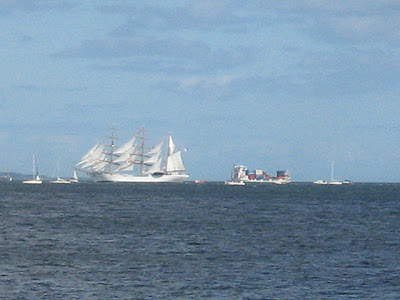 - oh, and "Heroes" looks to be a really cool show. We just went through the first 4 episodes today, and they were great.
categories : News