It's no secret that I am more terrified of dentists, than of nuclear holocaust. There's no doubt in my mind, that dentists are devil spawn. Dentists can inflict pain, in ways that would make the former SS and Gestapo look like a bunch of gay boy scouts...
- I guess you get the picture by now - I absolutely HATE going to the dentist.

Two days ago, I started getting this infuriating pain in one of my teeth. When it was at it's worst, I had to go lie down, and after one or two hours, I was rather exhausted from the pain.
I knew something was wrong, and I booked an appointment at the dentist. Luckily (and only because I was willing to be checked by another dentist in the clinic) did I get an appointment today at 10.30 am. And thank god. The first message I got was "Yes, we have an opening in 3 weeks" THREE WEEKS?!?! I'LL BE DEAD BY THEN!!

Yesterday just after dinner, the pain intensified - like 5-fold. It was supposed to be a cozy dinner with nice takeout in our garden, but I had to cut it short, and go munch a bunch of pills, and lie down... again.

So at the dentist today, I was nervous as always, when I have the feeling that something is bad.
I got x-rayed, and the image revealed a rather large pus-filled infection, but no holes. Nothing wrong with the tooth, except that infection. But it had spread to the nerve, and so I had to get my second root canal. What a bitch. Especially since this one was definetely NOT self inflicted, from lack of proper dental hygiene. Worst part was, that normally they drill a hole, add some stuff that kills the nerve, and close it up with a temporary filling. I could not get a temporary filling, because the pus kept flowing from the hole. Nice, huh? So I'm even on penincillin over the weekend, to clear the infection. Man I must've been a real ass, to get such bad karma my way.
I'm still numb in the face...

- and don't you just love, how they put you in the chair, leave you in the empty room for a few minutes with all the nasty tools, just to kinda set the mood? 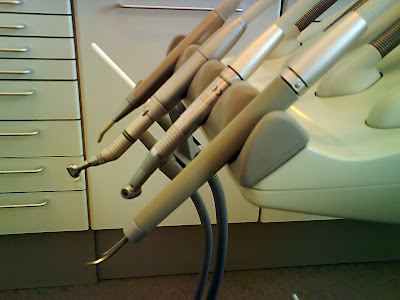