(Forest of the) Aerofly

Project ID : Forest of the AeroFly (Concordus Insecticus)
- relocation of an older piece

I came across a funny picture at Human Descent, showing a fly with a engine instead of head and eyes. I thought this would be a nice challenge, so I started recreating it in 3D.
Obviously it got a little out of hand, and as usual I ended up with a scene of several million polygons. I REALLY have to learn to limit myself.
I blame the very detailed rotary engine, and the hairs of the fly, which ended up using more polys than I had expected. But hey - at least I now have a detalied rotary engine, for when I decide to do an older plane.

I've used a variety of techniques for this image :
Mesh/poly-modelling for the fly, wheels, legs, wings etc.
Loft objects for the leaves
Scatter to get hairs on the fly
And I've used a lot of time post processing the image in Photoshop.
I should probably say images, because i split the scene up into 3 parts, and rendered them seperately, with passes of Diffuse, Specular, Lighting, Shadow, Occlusion and Zbuffer. Those passes gave me a lot of extra stuff to work with in Photoshop.

Below are final images, as well as some misc. pictures from the process. 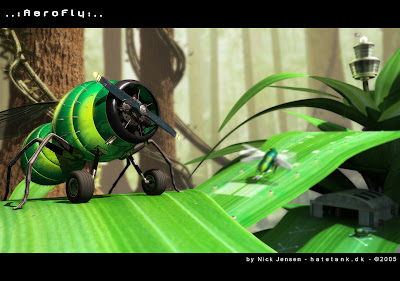 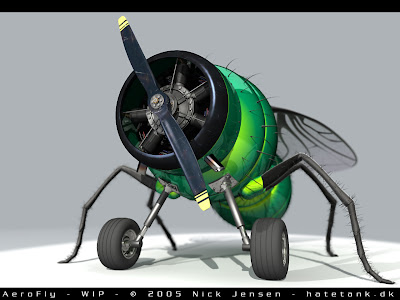 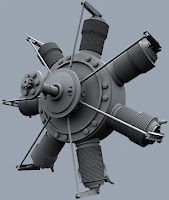 Rotary engine - Made from a mix of primitives, splines with lathe/extrude and polymodelling. 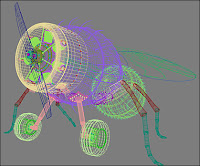 Aerofly wireframe - Wireframe screendump - prior to adding the hairs on the legs.

You can buy the rotary engine at Turbosquid or the3Dstudio
categories : Polys